Markets ended the year with a strong fourth quarter but that rally was only enough to bring global stocks back to breakeven for the full calendar year. Small cap US stocks struggled to keep pace with their large cap brethren and emerging markets had another very difficult year, once again posting double-digit losses in 2015. Recent trends we’ve seen in global markets have continued, including the strength of the US dollar, weakening prices from oil and other commodities and leadership from very large US corporations. Finally in December we saw the first Federal Reserve rate increase in over eight years. Despite that, bonds did not fall as so many had anticipated and broad bond benchmarks were largely flat.

Economic Update
Generally speaking, economic news is more of the same we’ve seen for the past several quarters. The US economy continued to improve and expand, although at a somewhat lower rate than many would prefer. The employment situation is the best it has been in years, with unemployment now at 5.0% with more and more people voluntarily leaving jobs and the highest job opening we’ve seen in well over a decade.

Housing and residential real estate construction continue to improve across the country as new building permits picked up again in 2015, although we remain well below pre-recession levels of new construction. National home prices have also gained ground once again in 2015 but remain below 2007 levels. 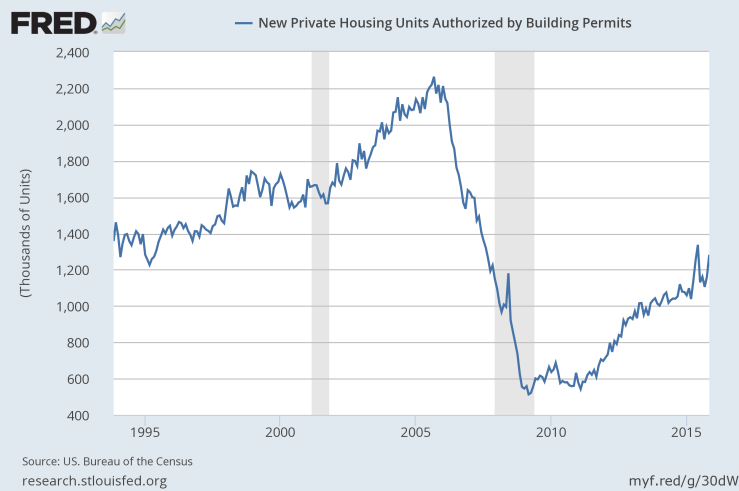 Perhaps not causal but certainly correlated, average vehicle miles driven in the US has finally started to trend up after a long period, indicating individuals are more willing to drive. Auto sales also reflect improving consumer confidence with some of the highest car and light truck sales figures posted in years.

It is also worth noting that total US household net worth is a full $20 Billion higher than the pre-recession 2007 peak.

Globally, China’s economic growth has disappointed relative to expectations, driving down Chinese stock markets and the Yuan. A basket of global currencies has fallen relative to the US dollar, making US exports more expensive but driving down commodity prices for the US and making Chinese and other imports more affordable on a relative basis. If you’ve been considering an international vacation, now doesn’t look like a bad time with the US dollar at its highest in a decade.

After a fairly quiet and inactive year from DC, some big changes came in the last quarter.  In early November, Congress passed The Bipartisan Budget Deal of 2015. Included was a provision to eliminate the very popular “file and suspend” Social Security claiming strategy. Put simply, “file and suspend” allowed a married couple to defer their own Social Security benefits while still claiming spousal benefits, maximizing the couple’s overall lifetime benefits. This “loophole” was closed, eliminating the possibility to use a slightly more complex strategy to increase lifetime benefits for married couples. There remains a very short window for individuals over the age of 66 in 2015 who have not yet done so to still suspend their own benefits. A six-month grandfather period was established, making the deadline to suspend benefits April 30th, 2016. Individuals already over the age of 62 in 2015 will not be affected and will still have the option to file restricted benefits, executing a file-and-suspend strategy. Individuals who were already claiming benefits but would like to suspend benefits (up to age 70) to receive higher benefits later in life are also unaffected.

The second piece of legislation is that once again Congress worked out a midnight deal to extend several popular tax breaks. After nearly a year of hemming and hawing, the so-called “tax extenders” will be renewed for 2015, retroactively for the full year. The major change this year is that many of the popular tax breaks will be made permanent. This includes Qualified Charitable Distributions to satisfy annual required minimum distributions, itemized deductions for state and local sales taxes, the American Opportunity college tax credit and section 179 business expense rules. Certain other provisions were extended for 2015/2016 but not made permanent, including mortgage insurance premium deductions and 50% bonus depreciation.

As always, you know where to find me if you’d like to discuss any of these topics and how they apply to your personal situation.